Why does rebar corrode?

Premature deterioration of reinforced concrete structures has become a serious problem worldwide due to corrosion of the embedded steel. The estimated annual cost of corrosion in the USA for bridges alone exceeds US$8 billion [1] [2]. The structures chiefly affected are those situated in an aggressive environments such as marine and road bridges to which de-icing salts are applied during winter periods.

Diffusion of CO2 (carbonation) into concrete

Carbonation lowers the pH of concrete, through a reaction with Ca(OH)2 to form CaCO3. Diffusion of CO2 into concrete takes place through capillary pores. It is therefore strongly dependent upon concrete porosity and relative humidity, besides temperature. When the pH has reached a value of about 9; the carbon steel rebar is no longer in a passive state and corrosion can take place.

Carbonation, alone, is rarely a source of concern for lifetimes below 50 years unless concrete quality is inadequate and/or workmanship is poor (including insufficient concrete cover). For longer lasting structures carbonation must be taken into account.

Diffusion of Chlorides into concrete

The main cause of concrete deterioration. As chlorides diffuse into the concrete some are trapped in a "bound" form while the rest, "free" chlorides, diffuse further and cause corrosion as they reach the carbon steel rebar, according to the following steps (and Figure) –from ref12. 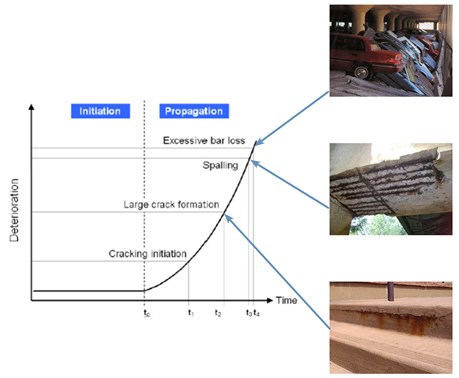 Critical Chloride Threshold Level (CCTL) [8]:  This is the chloride content above which rebar corrosion starts.  There is some disagreement regarding how to measure it and about its value, but  the value of 0,4% per cement weight is generally accepted for C-steel in the absence of carbonation.

Interaction between Carbonation and Chlorides

Carbonation worsens chloride corrosion by releasing some of the “bound” chlorides, making them available for corroding the C-steel rebar.

Carbonation also lowers the PH and therefore the CCTL value as well. 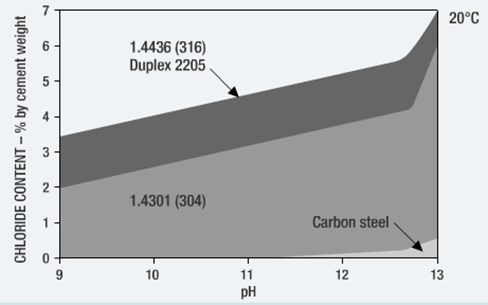 Concrete reinforced partly with carbon steel (CS) and partly with stainless steel (SS) will not suffer from rebar corrosion in a chloride environment if SS rebar only is in contact with chlorides. In real situations, such as that of repairs, or when the CS rebar is too close to the surface, some corrosion of the CS rebar may take place. There will be three CS corrosion mechanisms involved (5)

All studies support the conclusion that galvanic corrosion between SS and CS is negligible.

There are many causes for crack formation (see table below).

While hairline cracks are accepted as they are almost unavoidable and do not reduce the strength of the structure, larger cracks provide wide openings for corrosive ions to the rebar, bypassing locally the long initiation time.

Sealing cracks is an option, of course, but not applicable in recesses or in hidden areas…and this is already a repair operation as cracks may form years later. Sealants delay the onset of corrosion, but not forever.

Predictive models aim at assessing the chloride and/or CO2 diffusion into concrete. Basically, they predict the time it will take for chlorides to reach a critical value (Critical Chloride Threshold Level, CCTL) on the rebar surface. The generally accepted CCTL value is 0.4% of the cement content in the concrete.

Such models provide meaningful results only if the physical mechanisms are those modelled and if the input data are correct. The latter may be a challenge, in view of  i) the wide variation of diffusion coefficients between different types of concrete (up to 25 times) ii) the degree of exposure iii) the temperature variations and iv) the role of cracks.

In addition, poor workmanship may occur and induce unknown factors.

As a result, and in order to simplify choices, simple rules have been implemented in the building codes.

And from these two parameters a minimum concrete cover of the rebar is specified. [12] [13] [14]
In case of corrosion resistant stainless steel rebar, no extra concrete cover should be necessary* and an important saving in concrete and weight could be achieved.

* This value is left up to each country